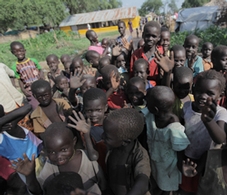 Dr. Benjamin Keyes, assistant professor in Regent University's School of Psychology & Counseling (SPC), is a man who keeps his promises.When Keyes discovered the state of the nation during his travels to South Sudan in December of 2012, he vowed to return. This summer, he did—bringing $13,000 of food supplies along with him.

"Families are starving to death," said Keyes. "I saw a lot of distended bellies on small children—they were really at the serious end-stages of starvation," said Keyes, who also serves as director of Regent's Center for Trauma Studies.

Keyes explained that those left behind at the camp, some 400 people, were families of the nation's military personnel. As the nation of South Sudan struggles economically, politically and socially, the members of its military have only been compensated for two months' wages throughout the past six months.

"South Sudan is a country that is still walking wounded—still dealing with the atrocities of war," said Keyes.

"You would have thought that the heavens opened up and God poured manna from the sky," said Keyes, recalling the first day of food distribution at the camp. "They sang, they praised God, they danced, they beat drums, they hugged, they kissed—it was quite amazing."

Despite the history of the new nation's suffering and its economic hardships, Keyes explained that the South Sudanese are a people who hold onto their faith. This is what inspires him to offer aid, and his goal is to return to South Sudan along with other members of the Trauma Team.

"I love the faith that they have and that they believe they can create a better life for their children even though they have nothing," said Keyes. "Nothing except that belief, that hope that they firmly place in God."